A Funny Thing Happened at Foyles – I Came Out!

I’ve been busy of late, polishing up the first draft of The Last Shroud ready for the editor, doing some last minute research and also engaging in a fair bit of walking in Dorset and Yorkshire. Still, amongst all those activities, I also found time to attend a fringe event of the London Book Fair which was held in Foyles in Charing Cross Road in mid-April.

I’ve had over a month to think about it now, the day I spent at Foyles. It was the third day of a three-day virtual conference for independent authors – so day three was an actual conference and where better to gather independent authors than Foyles – the epicentre of independent bookselling. This post is not really just about that day because on its own that one day signified nothing but it was part of a process that has taken me several years.

I’ve just handed my editor the fourth, and final, book of my Rebels and Brothers series. So now seems a good time to take stock of where I stand as an author. It’s rather hackneyed now to refer to a journey, but I suppose the word is so often used because everyone understands what it means. It has been a journey for me from taking early retirement from teaching to finishing a series of historical novels. When I started writing I never intended to self-publish – I had no idea whether what I came up with would even be worth publishing! But when the first book, Feud, was ready, the possibilities of self-publishing were so much greater, so I jumped into the water.

Let me say that, when I jumped, the body of water was about the size of the Caspian Sea and now it’s about as big as the Pacific Ocean. Recent years have seen the rise of the independent author and as a result a massive increase in the number of books ‘out there’. Are my books better or worse because I decided to self-publish? I don’t know; you tell me. In my view it’s the quality of the book that matters to readers, not who publishes it – but I digress! Back to Foyles and its place in my journey…

The day didn’t start well really. I arrived at Charing Cross Road with about an hour and a half to spare so I’d planned to have a long and relaxing breakfast at a branch of a well-known beverage selling chain. That was the plan except the food wasn’t that good and it wasn’t that relaxing. People kept rushing in, buying coffees in a blur and leaving – anyone would think they had work to get to. That shop needed a revolving door – it might have cut out the draughts too.

Eventually I made my way to Foyles. It’s an impressive place – independent book selling made bricks and mortar – well, steel and glass anyway. I arrived in time to register for the conference, pick up my name badge and help put papers on chairs. I was born to put papers on chairs so no problem there, aside from a touch of OCD as to whether the papers were laid square on each chair. I was a bit disappointed that coffee was not yet available as I had only had three so far and it was already ten o’clock. I should have brought a coffee drip-feeder.

So, in case you’ve already forgotten, the conference was for independent authors – that’s to say authors who do not have contracts with one of the large publishers. So it may be they are published by small presses or, like me, they self-publish. The conference was staged by several organisations, one of which was the Alliance of Independent Authors, ALLi for short. I mention that one because I’m a member so that’s why I was there at all – I know, a shameless plug for ALLi.

Anyway, to get to the point… The conference programme was varied and very useful, but that wasn’t what mattered most to me. For me, the most valuable aspect of the day was meeting up with other writers and renewing acquaintance with those I had met before. In the late afternoon and early evening the authors set up their tables, as I did, and displayed their wares for the 2015 Indie Author Fair, whilst visitors were plied with wine. 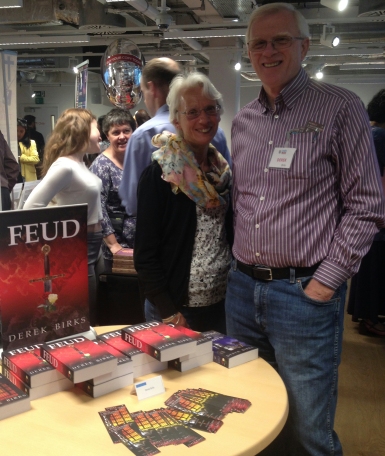 I’ve realised since that for me the day at Foyles was about being with other writers and not feeling out of place – not feeling that I was a retired history teacher who had somehow conned his way in to mingle and grab a glass of wine. It was great to have people come up to my table and make positive remarks about my book covers and swap stories about books, writing and life in general.

The day at Foyles caused me to reflect upon how far my life as a writer had changed since I published Feud in 2012.

Back then it was all about the book – could I even write one? Would anyone read it? Would I be condemned as a semi-literate fraud? Then, having written one, was it all a fluke? The second book was written and a series evolved but surely I must have exhausted all my ideas – how could I possibly write another book that would have the same qualities yet be different? Surely readers would see through me this time. But by September 2014 the third book was out and I was starting on the final book in the series. Amazingly, the ideas had not yet dried up and my books were still selling.

So up to then it was all about the books – and yet it wasn’t. Something else was ticking away in the background. No, not a bomb; it was rather less dramatic than that. It was as if a computer program was churning away, unnoticed by all, gradually processing a change in my life, byte by little byte. What was happening was that all the time I was writing I was also starting to communicate online with other authors and readers: Facebook, Twitter, my website, email… and so on. I had a small – and not very perfectly formed – digital ‘presence’. I found authors were very welcoming and supportive, especially those in my chosen genre of historical fiction.

One day, road to Damascus-like, it struck me that it might be good to actually meet some of my online contacts and I arranged to meet up with one or two at the inaugural Harrogate History Festival in 2013. Mostly though, my contacts remained digital but in the past year that has changed: I’ve come out!

Last year at the Historical Novel Society’s London conference I was lucky enough to hook up with some of my twitter friends in the flesh and also meet many new ones, including several from North America and Europe. I’m not going to name drop – you know who you are! At Harrogate again a few months later, the process continued in what seemed an organic, unplanned way – it’s amazing who you can meet in a bar…

It’s often said that writing can be a solitary experience – and it can – but writing assumes that you want readers – it’s a two part process. So you have to communicate and put yourself out in the writing and reading community. And it’s like any other relationship: it’s hard to make a genuine connection over the phone or online, but meeting people and having a chat over a drink or a meal makes you feel more involved. Listening to what others are doing as people as well as writers is what it’s all about. In any of the conversations I’ve had with other writers in person, we don’t talk much about our own books, or at least only in an introductory sort of way: “oh, you write medieval stuff, mine’s Roman.” Beyond that, we talk about writing, visiting locations, interesting quirky historical things and we chat about our children, our interests, the theatre, politics and we exchange anecdotes – and the same is true with the readers I’ve met.

At Foyles this was amply demonstrated: we talked about books, yes, of course books, but we also talked about our families and our experiences. Through such contact you feel that you’re not alone. You’re one of many in the vast worldwide community of readers and writers. I’m glad I came out…

The final book in the Rebels and Brothers series,The Last Shroud, comes out at the end of August this year and will be on pre-order shortly.

2 Responses to A Funny Thing Happened at Foyles – I Came Out!