Common Myths of the Wars of the Roses: Richard Neville, Earl of Warwick, the ‘Kingmaker’? Part 4

This is the final part of my exploration into the notion that Richard Neville, Earl of Warwick, merits the epithet of “kingmaker”.

[N.B. All 4 parts were previously published on the English Historical Fiction Authors Blog]

In the winter of 1469-70, despite an apparent rapprochement with the king, Warwick was contemplating open rebellion. Apart from capitulation, it was his only option: he must replace Edward IV with his own son in law, George, Duke of Clarence.

So, in March 1470, Warwick created a crisis by backing Lord Welles in a local feud with one of the king’s household men, Sir Thomas Burgh. At first, the king was unaware of the involvement of Warwick and Clarence, but when he defeated Welles, he discovered plenty of evidence. Though he summoned the earl and the duke to explain, they refused to come and gathered their forces in the midlands. Warwick hoped for support from his brother, John Neville, Earl of Northumberland, and from Lord Thomas Stanley, the most influential lord in the north-west. Both refused to join him and, without them, he knew he was doomed.

Fleeing south, Warwick and Clarence collected their wives and managed – just – to evade the king’s pursuing army at Dartmouth. From there, after attempting to gather more ships and men at Southampton, they sailed to Calais. But King Edward had already written to Calais and the ships were denied entry, though Warwick’s heavily pregnant daughter Isabel was going into labour and subsequently lost her child.

Warwick had little choice but to head for France and hope for a warm welcome. Another attempt at kingmaking had ended in abject failure.

Warwick’s ships continued along the channel, indulging in some gratuitous piracy against Flemish ships on the way. The earl might have seen this as a windfall, or perhaps he reckoned that action against the Burgundians would ease his entry to a French port. My guess is that he thought it couldn’t hurt his reputation with the French king, Louis XI, when he asked for his protection.

Condemned in England as a traitor, Warwick now faced an ignominious end to his illustrious career, but remarkably, in a matter of months, he managed to resurrect his kingmaking ambitions. How did such an unlikely reversal of fortune come about?

Even before this latest disaster, Warwick surely realised that Clarence was a weak reed so, if he really wanted a change of monarch, he needed a better candidate. One of Warwick’s few remaining assets was his daughter, Anne, and now whoever she married would need to bring something special to the family – preferably a touch of royalty. He needed someone whose name alone would attract men to his banner, which brings us to one of the most interesting volte-faces in English history: Warwick’s pact with his most bitter enemy, Margaret of Anjou.

It is a measure of Warwick’s utter desperation that he was willing to fling aside previous loyalties to mount one last attempt at achieving real power. 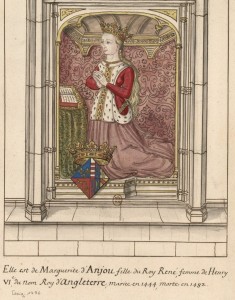 If Warwick had ever considered the possibility of reconciliation with Queen Margaret, he must have viewed it as a last resort. Well, in May 1470, the last resort had been reached. Yet, how could the former queen be persuaded to agree to a pact with the man she regarded as the architect of her family’s demise? England already had a spare king. The unfortunate Henry VI had been a prisoner of Edward IV since July 1465, but his queen, Margaret of Anjou, had never given up hope of restoring not only her husband but more importantly her son, Edward of Westminster.

Whilst it is true that Margaret would need a lot of persuading, by spring 1470 with no resources left to her, even the indomitable Margaret was low on optimism.

Louis XI, known as ‘the universal spider’, was an expert manipulator of people. He knew from Warwick’s diplomatic missions that the earl favoured a French alliance – a policy over which he fell out with King Edward who instead allied himself to Burgundy, France’s enemy.

This was an alliance King Louis was desperate to break. Thus, between May and July 1470, he brokered negotiations between Warwick and Margaret. He was very persuasive and both parties recognised that it was their last chance. Margaret swallowed her bile and came to terms, doing her best to humiliate the earl in the process; and Warwick, always a better diplomat than soldier, soaked it up on his knees.

At first it was probably just one of many irons in the fire for ‘the spider’, but once it seemed that it might actually happen, he provided money, ships and men – the lifeblood of invasion without which Warwick could have gone nowhere!

One could devote a dozen posts to the subsequent events but since my focus is on the kingmaking, I shall simply note that, against all odds, Warwick succeeded in putting together a coalition of Edward’s enemies, including not only Queen Margaret but the renegade lords: Jasper Tudor – King Henry’s half-brother and John de Vere, Earl of Oxford – a diehard Lancastrian.

Nevertheless, as always, success in England would depend upon the actions of a few key men: his brother John Neville, recently stripped of the earldom of Northumberland; Lord Thomas Stanley and, not least, the Duke of Clarence himself. How would all these individuals react in the crisis that Warwick created?

When Warwick landed in the south-west in September 1470, he proclaimed that he was restoring the rightful king, Henry VI. However dishonest one might feel now that this claim was, there is no doubt that it resonated with some at the time. Bear in mind also that, at this point Edward IV had no male heir whereas Henry VI did. However unlikely it seemed, Warwick had put together what appeared to be an attractive package.

King Edward was in the north stamping out Neville-backed risings, but still confident he could defeat Warwick. However, one by one, his leading nobles joined the rebellion: notably Lord Stanley and the Earl of Shrewsbury – but also crucially, and at the very last minute, Warwick’s brother, John Neville – still smarting from the loss of his earldom. Since he had always remained loyal to Edward, it was a body blow to the king. With Warwick advancing from the south and John Neville close by in the north, the king could only disband his army and flee to his Burgundian ally, Duke Charles. Meanwhile, his pregnant wife, Elizabeth Woodville, took sanctuary with her daughters at Westminster – not for the first, or last, time!

Victorious, Warwick headed for the capital to free a bemused Henry VI and await the return of Queen Margaret and her son, Edward – recently married to Anne Neville. Nevertheless, he faced some tricky problems ahead in managing a hastily-engineered coalition which amounted to an alliance of his enemies. Once Queen Margaret returned, along with some of his most bitter foes, such as Henry Beaufort, Duke of Somerset, he must have feared what would happen. All that though lay in the future, because Queen Margaret was reluctant to take the leap of faith and return to England, beset by her own doubts about the wisdom of trusting Warwick.

Thus, at the heart of Warwick’s alliance lay animosity and mistrust.

His friends too were nervous: some supporters, notably Stanley and Shrewsbury, received little reward for their vital support. His brother John, risking all to support him, must have been uneasy about his rival in the north, Henry Percy, recently restored to the earldom of Northumberland by Edward IV. If these men harboured doubts about what they had done, those with no love at all for Warwick were just biding their time until Queen Margaret arrived. If enough pressure was applied, would the coalition simply splinter?

The sudden return of Edward IV in March 1471 provided the first test for the new regime. Edward landed with perhaps 500 men, professed loyalty to Henry VI and claimed that he wanted only his dukedom of York. With hindsight of course this seems pretty hard to believe, but at the time it created confusion at a critical moment. Edward’s boldness paralysed his enemies, for though both Northumberland and John Neville could have stopped him in his tracks, neither did.

Battle of Barnet via Wikimedia Commons

Edward IV hurried to London where he returned the old king to the Tower and prepared to meet Warwick head on. At the resulting battle of Barnet in April, several key advantages lay with Warwick: better artillery and two reliable commanders in his brother, John, and the Earl of Oxford. However, since it was fought in a fog, the outcome might just as well have been settled by the toss of a coin. Yet perhaps it was a fitting end to the chaotic years of plotting and in-fighting from 1469-71. Even so, Edward gathered only modest support before he reached the midlands. After all, who would risk all by supporting him? Well, as it turned out, his errant brother, George, Duke of Clarence, would.

Clarence was the ‘spare thumb’ of Warwick’s regime and was even more worried about his future than Warwick himself. Though the earl might have foreseen it, Clarence’s sudden defection to Edward, taking all his adherents with him, changed everything.

Warwick not only lost at Barnet, but he was killed, so his kingmaking exploits ended there. Only hours afterwards, Queen Margaret and her son landed at Weymouth.

King Edward’s troubles did not end at Barnet, but Warwick’s ambitions did. Like all his kingmaking attempts, the last was fatally flawed. You could argue that he was unlucky and that, had he won at Barnet, his achievement would have endured. But it was not just bad luck. His last hurrah was built upon a creaking foundation and, in his desperation, Warwick ignored vital flaws – not least the very real problem of what to do with Clarence. Clarence, as they say, ‘voted with his feet’.

If ever there was a tragic figure in English history, it is Richard Neville, Earl of Warwick. One of the great men of his age, he promised much, but was destroyed by his own pride and ambition. He was not the only English nobleman to perish in that way during the medieval period, but he was certainly one of the most notable.

For me, there is no occasion when Warwick justifies the name “kingmaker”, for he made no-one king. In every case, other factors were more important than the role of Warwick himself and even the readeption of Henry VI proved so fragile that it barely lasted a few anxious months. The image of Warwick, the kingmaker, belongs only in the pages of historical fiction.

2 Responses to Common Myths of the Wars of the Roses: Richard Neville, Earl of Warwick, the ‘Kingmaker’? Part 4