Diana Jackson – Missing: Past and Present 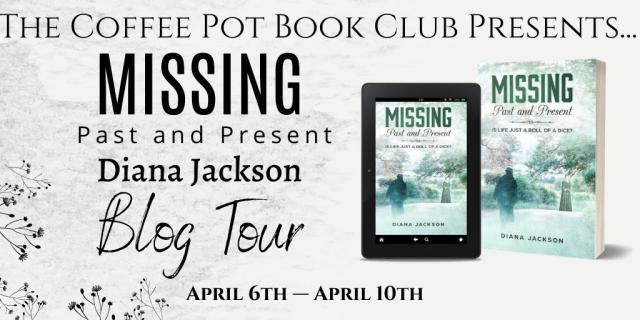 I am delighted to host the very first stop on this Blog Tour for Diana Jackson’s new book: Missing – Past and Present.

I was lucky enough to get hold of a copy of this book just before it came out on February 28th and really enjoyed it.

First, here’s what the blurb says:

Following the mysterious disappearance of her husband, Dorothy Gibbons, affectionately known as Lady Pink Hat, trudged the lanes around Drumford, homeless and directionless. Alone, she rolled a dice, reflecting on her life, times both painful and pleasant. She stumbled upon The Grange, which changed the course of her life. In her isolation and surrounded by old books Dorothy began to write …

An 18th Century aspirant nun, Millie, ran away from The Grange …

Jamal Hussain, a Syrian refugee and asylum seeker, was fostered under the careful wing of Dorothy until leaving school and finding work. He and his brother settled in a nearby flat until the misguided Ahmed Hussain also disappeared.

With three missing people, who will discover the truth? Is it Millie who is still haunting The Grange until her story is told?

Here’s how the author sees the book:

“This novel is special to me because it is influenced, in part, by my experience volunteering in a soup kitchen in Bedfordshire and also at a local food-bank here in Fife. My experience as a course team leader and personal tutor at a College of Further Education in the heart of Luton and a teacher of English as a Second Language is also reflected, where I gained valuable insights into social issues and difficulties some young people of today face.”

And here’s my take on Missing: Past and Present

Most books I read are full of violent action, but though there is very little such action in this book, I really liked the story of a woman who re-invents herself after a bewildering set of events that almost destroy her.

Diana’s book is easy to read and a little addictive right from the start and that is down to the quality of writing. The first person, conversational style pulled me in as if I was following a thread; and I kept pulling at that thread, never entirely sure where it was going to take me.

It is an intriguing story and the strength of it lies in the nature of the central character, Dot. I really wanted to know how things turned out for her. Why? Because she’s a victim, but not a pathetic one; she somehow rises above the problems that seek to overwhelm her. She shows courage and determination in spades – and she has that almost indefinable ability to: ‘just get on with it’.

Dot is also a character who is easy to identify with – because she is, despite her difficulties, very much of this world. Diana has created a complex character – very practical and worldly on the one hand, yet, as her difficulties reveal, quite blinkered and naïve on the other.

This book also has a story within a story: the Nun’s Tale, which is where the ‘past and present’ in the title comes in. Writing a story is both cathartic for the character Dot and interesting for the reader. Intertwining the two parallel stories could not have been easy and sometimes perhaps it seems a little forced, but it works. It also enhances the settings of the book and gives it a much broader scope than the contemporary story alone would have provided.

The story brings in several themes: a love of books; an appreciation of, and interaction with, the simple, everyday things in life – and even with the local wildlife. It also touches on social issues such as interracial relationships, the nature of faith and provision for the poor and homeless. But on all these issues, the book has a light touch and they are skilfully woven into the fabric of the tale.

It’s a book that is well worth reading.

Where can you get it?

Look no further than: Amazon: https://books2read.com/u/3LDy2w

Now, of course, you’ll want to find out more about the author, Diana Jackson, and here’s something to start you off:

After six years in the wilderness, (wandering the Fife Coastal Path and finding her way back to writing, to be precise!) author Diana Jackson is about to launch the second novel in her Mystery Inspired by History series. A retired teacher of sixty one years, Diana Jackson has published five works since 2009. Her first, historical romantic fiction, Riduna, set in the Victorian era, was published by Pegasus Elliot Mc Kenzie in 2009 but was re-launched by Eventispress in 2012 – a writer’s indie collaborative publisher, through which all her other works have been published:

2013 The Life and Demise of Norman Campbell ~ a memoir

2017 The Healing Paths of Fife ~ a personal fantasy memoir

After moving to Fife from Bedfordshire in 2014 Diana has had a break from her life as an author to settle into her new life within the Kinghorn Community. The Healing Paths of Fife tells of that journey. Rejuvenated, she finally turned to finishing MISSING, Past and Present.

6 Responses to Diana Jackson – Missing: Past and Present