The Ladies of the Magna Carta – a Review

I am absolutely delighted that my blog has the honour of being the final stop on a blog tour to celebrate: The Ladies of the Magna Carta by Sharon Bennett Connolly.

Sharon Bennett Connolly is fast becoming the go-to historian if you want to find out more about the lives of medieval women. Her latest book is interesting on so many levels for once again the author introduces the reader to an alternative medieval world – a world where the focus is on the women, not the men.  Some of the stories of these noblewomen are inspiring – even heroic – but others reveal the dark side of medieval life at the top.  Above all, this book demonstrates the vital role played by women in the tumultuous events surrounding the Magna Carta of 1215.

The world of men in the twelfth and thirteenth centuries was dominated by the close relationship between England and the continent. The lives of powerful men, many of whom held ancestral lands and titles on both side of the English Channel, were defined by this situation. But what this book demonstrates very clearly is that the world of women was preoccupied with it too. The fortunes of both men and women were shaped by inheritance and advantageous marriages. Men, and sometimes women too, would pay a great deal and sacrifice much for the fruits of these.

Viewed from a twenty first century perspective, the marriage market of the period was quite terrifying in its ruthless and seemingly relentless exploitation of women – both the very young and old! Yet, of course, in its time, women would have accepted their part in the horse-trading that went on – even if they did not always like it.

It is tempting to see these women only as victims but the author shows that, whenever they could, many of these women chose to exert their influence – and not just in their many grants to religious houses. Some played key roles in diplomacy and earned the trust of their male counterparts. One or two even took on the English kings with a degree of success. But, of course, their lives hung in the balance for they were sometimes at the mercy of men with few scruples such as King John – as we see with the dire fate of Matilda de Braose and the vice-like control he exercised over Isabella of Gloucester.

Some of those featured in this book stood up for their own individual rights – especially when widowed. But whether they showed fortitude or compliance, the marriage market controlled most of their lives. The De Warenne heiresses, for example, displayed much courage in the defence of their rights but at the end of the day they were still prisoners of the system. Only a few truly remarkable women, like Ela of Salisbury and Nicholaa de Haye, exerted such enormous influence over the men in their lives that they emerged as key figures in their own right.

The stories of the women who played a prominent part in the history of this period are endlessly fascinating. There are so many, I can’t decide which one is my favourite! It is easy to focus on one or two individuals but I was overwhelmed by the sheer number of women that are documented.

What Sharon Bennett Connolly does so effectively in all her books – but I think even more so in this one – is to create compelling narratives from the scraps of detail that are all that remain of these women. The focus of this book is the extent to which the fates of noble women were linked to the fortunes of the charter itself. Here we are presented with a tapestry of Angevin England where Sharon pulls on a thread and teases out a story to show us how the lives of noble women were inextricably woven into Norman politics and society.

The Ladies of the Magna Carta gives us a sparkling new lens through which to view one of the most well-known events in English history. 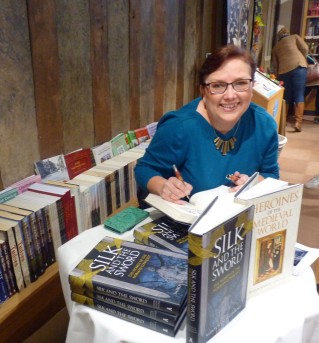 The Ladies of the Magna Carta was published by Pen and Sword Books on 29th May 2020.

You can find it – among other places – on Amazon UK or Amazon US.

You can find Sharon on …

2 Responses to The Ladies of the Magna Carta – a Review